Equine gastric ulcer syndrome is common and, therefore, should always be considered when caring for hospitalised horses as having a good understanding of this prevalent condition will allow for more effective management, writes Carly Gresak RVN BSc

Among domesticated horses, equine gastric ulcer syndrome (EGUS) is a widespread condition. Those likely to develop gastric ulcers are working horses that undergo strenuous daily exercise. According to McClure et al (2005), between 40-93% of working horses are diagnosed with EGUS. These working horses include dressage, show jumping, racing, endurance and western performance horses (McClure et al, 2005). Racehorses are reported to have the highest prevalence of EGUS, with 66-93% of individuals developing gastric ulcers during the active training period (Bertone, 2000).

Horses are ‘trickle feeders’ that typically graze for up to 18 hours per day in their natural habitat. Due to domestication, stabled horses eat at specific times when fed by their owner/keeper, usually two to three times per day. This unnatural feeding regime combined with vigorous exercise increases the likelihood of gastric ulceration, as exercise causes an increased production of gastric acid which can affect the lining of the stomach (Lane, 2015).

Veterinary professionals have an important role in helping to reduce the incidence of EGUS while the patient is under veterinary care. They also have a responsibility to advise clients on the correct care and prevention of the recurrence of gastric ulcers in patients who have previously developed them.

Stomach anatomy and gastric ulcers (types)
There are two types of gastric ulcers that horses can develop, glandular mucosal ulceration and squamous mucosal ulceration. The surface of the stomach can be either glandular or non-glandular or in the case of horses, both (see Figure 1). This means that horses have a composite stomach. The division between the glandular and non-glandular sections of the equine stomach is called the margo plicatus. The non-glandular half of the stomach is located dorsal to the cardia and includes the fundus, while the glandular region is located ventrally (Colville and Bassert, 2016).

The glandular region of the stomach is  located in the pylorus and the body of the stomach. The mucosa here is dark pink in colour and contains glands that produce gastric acid. The glandular mucosa contains ducts lined by glandular cells. These cells include mucous neck cells, parietal cells and chief cells, each producing different secretions. Parietal cells produce hydrogen and chloride, mucous neck cells produce a thin mucus (which coats and protects the glandular portion of the stomach, but not the non-glandular portion) and the chief cells produce pepsinogen, which converts to pepsin in the presence of hydrochloric acid. The hydrogen and chloride secreted by the parietal cells form hydrochloric acid, which gives the stomach its low pH (1.5-7) (Collville and Bassert 2016).

The adult equine stomach can hold eight to 16 litres (L) of stomach acid and produce up to 30L of gastric secretions within 24 hours. However, the horse’s stomach is relatively small in comparison to the overall weight of the animal (Moore et al, 2001). 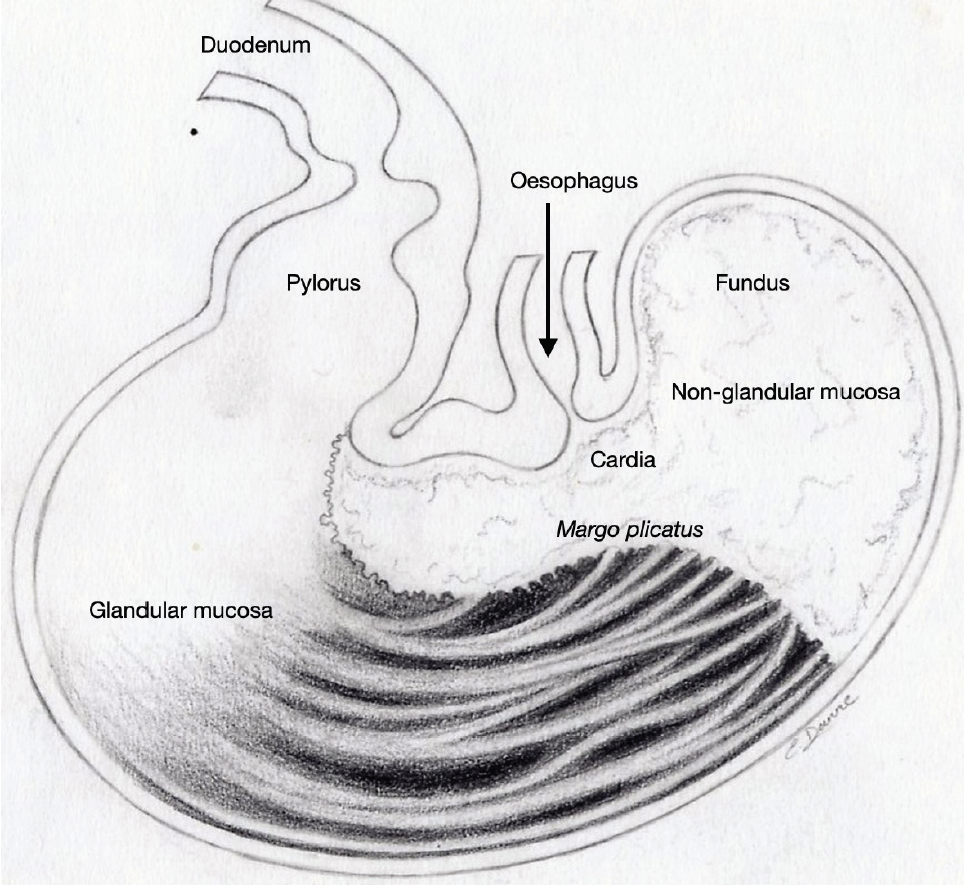 Causes of gastric ulceration
Gastric ulcers occur in horses due to high levels of hydrochloric acid, pepsin, bile acids and organic acids, which may overwhelm the protective defences of the gastric lining (such as mucus and bicarbonate). The duration of exposure to gastric acid can affect the occurrence and severity of gastric ulcers. Listed below are some examples of contributory causes.

Gastric ulcers are scored using a universal scoring system. This grades the gastric ulcers from 0-4 in both the glandular region of the stomach (see Table 1) and the non-glandular (see Table 2) region. Grade 0 indicates that the epithelial wall is intact and there is no presence of hyperkeratosis or hyperaemia. Grade 4 indicates areas of deep ulceration in the epithelial wall (Boehringer Ingelheim, 2018). 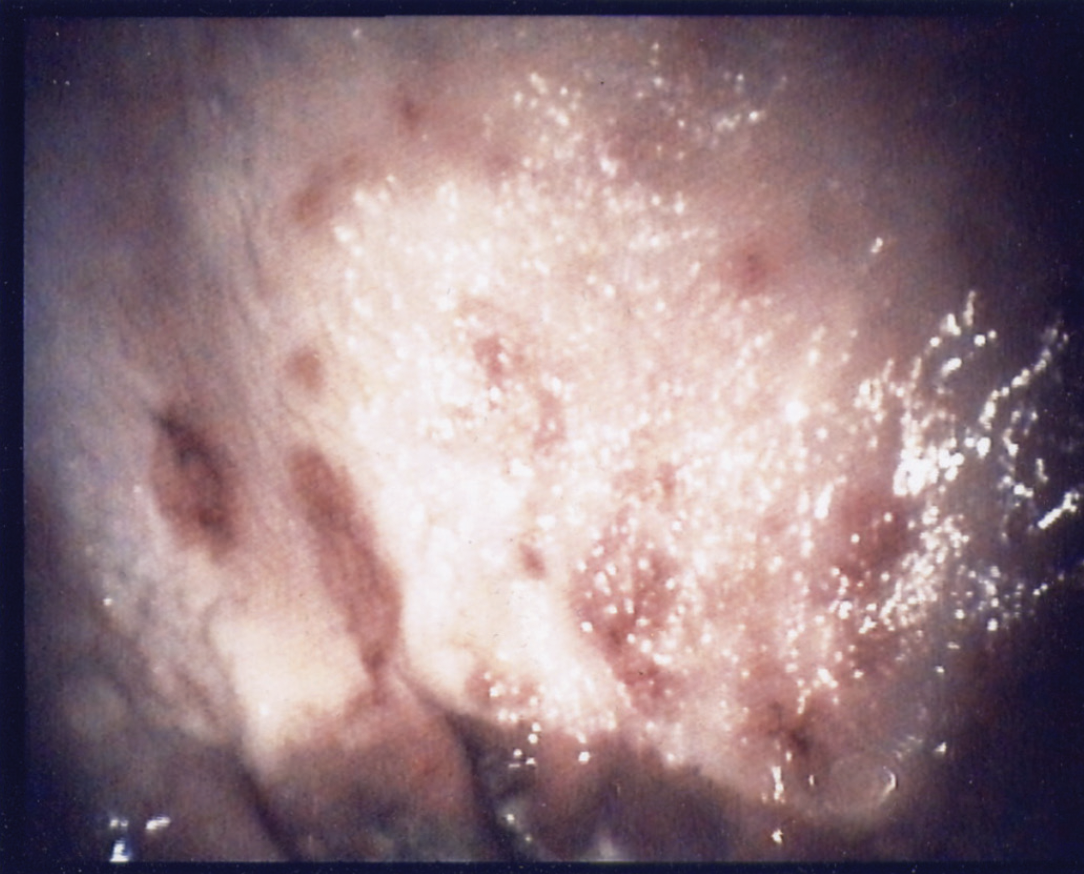 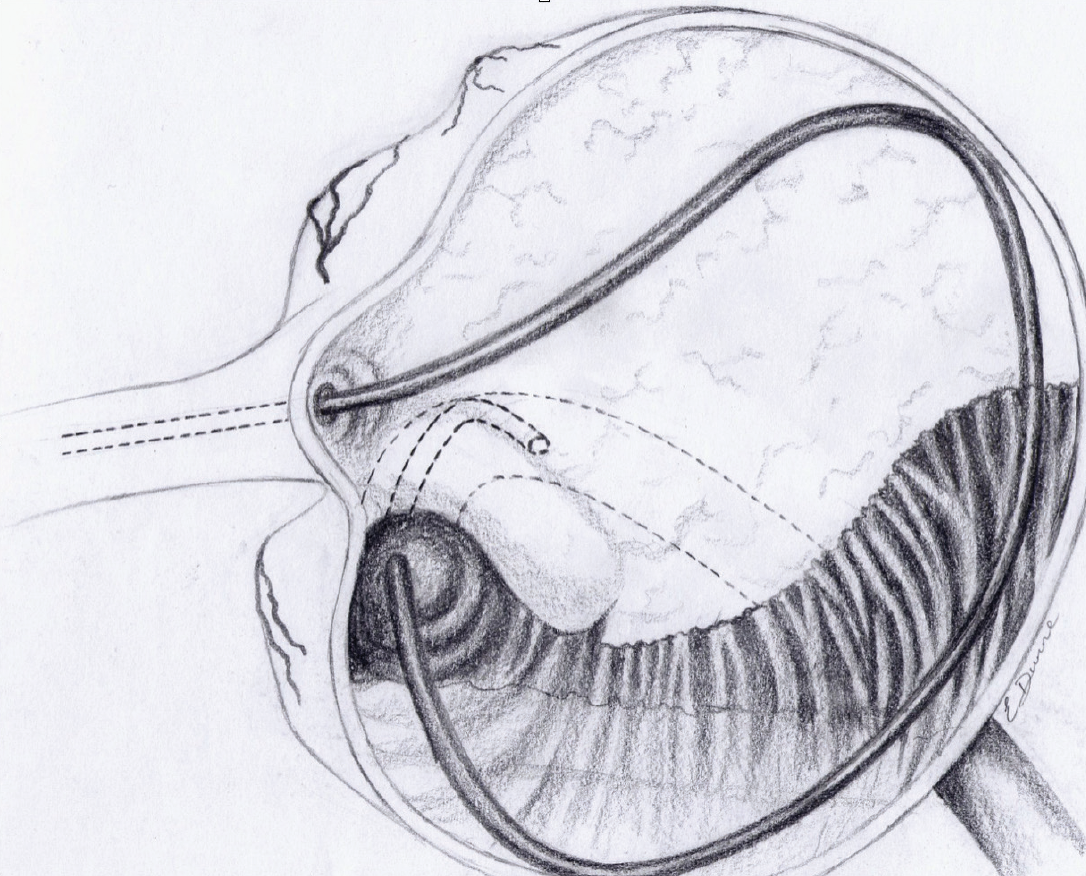 Cleaning and storage of the gastroscope

The gastroscope should be cleaned immediately after the procedure to prevent cross contamination by mucus drying within the lumen (Lane, 2015). Outlined below are guidelines on how to store and disinfect the gastroscope according to Meadowcroft (2019) and Boehringer Ingelheim (2018).

Omeprazole granules can be added to the horse’s feed. The feed container should be checked afterwards to ensure that the horse has ingested all the medication. The granules should only be added to dry feed and the feed should not be moistened as this may reduce the efficacy of the medication.

Prevention
Treatment with a proton pump inhibitor, such as omeprazole, can be useful in reducing equine gastric ulcer syndrome. The recommended therapeutic dose of omeprazole to treat gastric ulceration is 4mg/kg/day for approximately one month (Lane, 2015). Administering 1mg/kg/day can prevent the reoccurrence of gastric ulcers while the patient is in training (White et al, 2003).

If possible, increasing pasture turnout and a decrease in exercise intensity will help reduce the likelihood of gastric ulcers in horses; however, the lifestyle of a high-performance horse may not facilitate this (Camacho-Luna et al, 2017).

Altering feeding practices can be beneficial when treating gastric ulcers. The aim is to increase the amount of time that the horse spends chewing (Andrews et al, 2017). Avoid feeding large amounts at once and try to spread meals out by providing frequent, smaller meals during the day. Meals should ideally be offered every three to four hours during the day, rather than two to three times per day (Harris, 2001). By feeding more frequently and encouraging chewing for longer periods of time, the horse will produce increased levels of saliva which provides a buffering effect and helps neutralise stomach acid (Lane, 2015).

Some examples of commercial products that increase stimulation and prolong feeding times include alfalfa nets, ball feeders and chaff. The provision of alfalfa nets is useful as they allow the horse to chew for longer and also provide the horse with stimulation. Alfalfa nets contain small holes through which the horses must tease the forage out, therefore the speed with which they can eat is regulated. According to Andrews et al (2017), regulating feeding times will reduce the likelihood of the occurrence of gastric ulcers. Ball feeders also provide the patient with stimulation and increase feeding times (see Figure 3). The addition of chaff (chopped straw) to concentrate meals will facilitate slower eating times and promote chewing.

Providing the horse with access to a grass turn-out will reduce stress. Fresh grass will provide a buffering effect helping to reduce the incidence of EGUS (Lane 2015).

The above methods can also be provided for hospitalised horses who cannot be turned out to graze. Shellum (2008), recommends a variety of forage to be fed to sick horses to encourage feeding and therefore mimic the normal behaviour of horses. Palatable feeds can be provided to encourage horses to eat, such as fresh-cut grass, molasses, sugar beet pulp and apples. Horses should also be fed at regular intervals during the day as outlined above.

To reduce the incidence of glandular gastric ulcers, COX-2 selective NSAIDs are preferred (Richardson et al, 2017). If NSAIDs are indicated for the patient, ensure accurate doses are provided, only administer the minimum effective dose of the medication and monitor the patient closely for signs of dehydration, abdominal pain and other clinical sign of gastric ulceration which are outlined above. Dehydration will further increase the likelihood of gastric ulcerations during NSAID treatment so the patient’s hydration status should be monitored closely.

Conclusion
The high incidence of equine gastric ulcer syndrome in athletic horses requires veterinary nurses to understand why horses develop the disease and how to prevent it. This gives veterinary nurses an opportunity to enhance the welfare of hospitalised horses and provide preventative advice to owners to improve equine welfare in general. Although equine gastric ulcer syndrome is highly treatable, it is difficult to diagnose due to its vague clinical signs. Veterinary nurses can provide assistance to the veterinary practitioner in the diagnosis of the condition and implement efforts to both treat and prevent it in their patients.

2. Which of the following regions of the equine stomach is most likely to develop gastric ulcers?
A. Glandular mucosa.
B. Non-glandular mucosa/squamous mucosa.
C. Margo plicatus.

3. What is the purpose of the red valve that is found on the gastroscope?
A. To suction liquid through the lumen of the scope.
B. To push air out of the scope and into the stomach.

4. What is the recommended dose rate of omeprazole paste to a patient prone to gastric ulcers as an ongoing treatment?
A. 3mg/kg/day.
B. 1mg/kg/day.
C. 4mg/kg/day.

5. Which of the below activities helps to prevent gastric ulceration in horses?
A. Increased pasture turnout.
B. Feeding horses small amounts of food twice a day.
C. Increased daily training periods.
D. Stress.